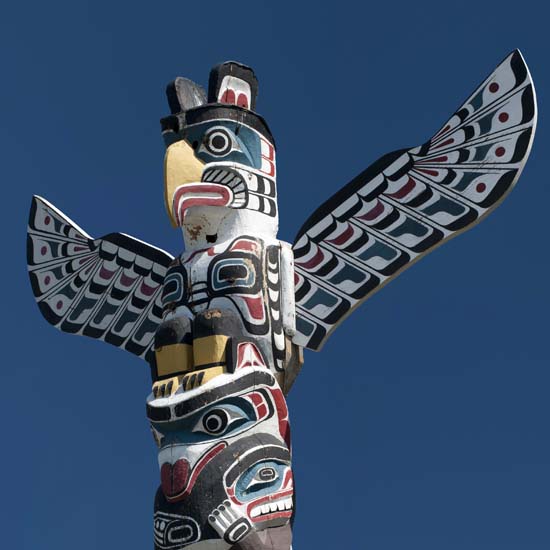 A Guide for Making a Totem Pole

Totem poles were originally constructed by aboriginal peoples of the Northwestern North American regions using crude tools and western cedar. These poles were used to tell stories of family ancestry, legends and tribal communities by the indigenous population. When settlers came to this region of North America, they commissioned these poles to be built for them as a sign of their wealth and power. Today, these poles are constructed by hobbyists with modern tools, taking significantly less time, but having as much affect as they had before on people who see them.

Once a log is found that is long and straight enough, use a hatchet and a draw knife to remove the bark from the log. This is a painstaking and slow process, but will expose the wood, allowing it to dry faster and make the log easier to work with over the course of the project.

Traditionally, totem poles have images of people or animals stacked on top of each other, often having a bird on the top of the pole with its wings extended. Using this as an example, use a magic marker to draw the face of each animal or person and its body onto the log. Once this is done, use a small chain saw to trace along these marks for the major lines, and a dremel tool for the smaller lines, like the eyes and facial features. Then start to shape these portions by creating the shoulders, and the head. Remember that totem poles are three dimensional, so every part of the pole can be seen.

Use an orbital and a mouse sander to take off the rough parts of the totem pole and finish shaping the totem pole figures. Paint the images that you have created with specific colors to give each figure their own character, or use a stain to blend the entire totem pole together.

If you have a bird at the top of the totem pole, make sure to attach a pair of wooden wings using self tapping bolts.

If you are looking to make a statement at your home and want some instant rustic charm, creating your very own totem pole is the way to go.