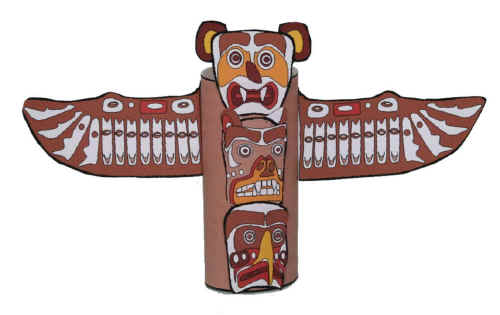 Like the Native Americans in the United States, Canada recognizes its First Nations as the aboriginal peoples who populated the lands first. In fact, many of the tribes are from the same original nations before the two separate countries were defined.

Show footage from the opening ceremonies of the 2010 Winter Olympics in Toronto, Canada. Point out the large totem poles placed in the arena and let students watch the dancers portraying the aboriginal peoples in North America. Ask students if any of the costumes look familiar. They may say the animal skins look like costumes from Native Americans they have studied. Or they may recognize the elaborate costumes of the Plains Peoples as similar to those of the Hopi in the United States plains areas.

Explain to students how totem poles served as religious and historical reminders for the aboriginal people of North America. Talk about different symbols, like animals or deities, used on the totem poles and what they may have meant to the First Peoples.

Give each student a long paper towel cardboard roll. Provide a variety of craft materials for children to use to decorate their totems. Also give students a piece of plain white paper. Instruct children to sketch their idea of what they want to include on their totem poles before they start constructing. Tell them to brainstorm their own symbols to represent their beliefs and history, but also let them know they can borrow designs and symbols they like from aboriginal totem poles.

Show your students how to stand the cardboard tube up vertically and place symbols up one side. Older students could use toothpicks, leaves, dried flowers, and smaller craft items to create intricate, natural details on their totems. As your students work, give them historical tidbits about the First Nations of Canada. Point out that many symbols used by aboriginal peoples were animal spirits from animals like bears, eagles, deer and elk which would have lived in the Pacific Northwest. Ask students what animal spirits Native Americans from Florida, California, or Nevada might look like and how they would be different. Totem poles would tell a tribe’s history based on real events and mythic stories. What are your students real histories? What kinds of mythic stories can they create to explain their families histories?

Parents could also provide photos of your children, family, pets, stuffed animals, favorite cartoon characters and friends for your kids to use on their totems. For younger students, print out a template of totem pole designs at http://www.dltk-kids.com/canada/mtotem.html.

If your students’ totem poles have trouble standing up without falling, use modeling clay to form a flat base for the cardboard tube. You could also place the bases in the center of paper plates and let students decorate the plates as a scene to surround their totem pole crafts. Let students use the craft materials or natural elements like pebbles, grasses, and sand to create a scene around the aboriginal totem pole.

For an added element, let your students recreate their version of the opening ceremonies by presenting their totem poles and explaining its symbolism to the class.