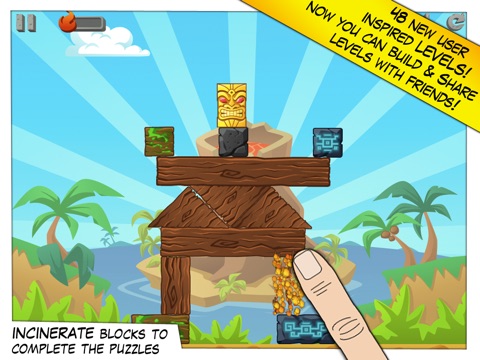 Tiki Totems 2 is the sequel to the popular iPhone puzzle game app, Tiki Totems Premium. The game is designed around the idea of totems – religious deities to a group of masks with feet that are afraid the volcano will erupt unless you can land the Tiki God safely on a rock near the ground.

That’s about it. The game is certainly longer, but it’s not much more difficult (with the exception of the round totem). The colors are nicer. There aren’t many upgrades from the original game.

The game is not different enough to truly justify calling it a second game. In fact, they could easily have simply added this all to the first game to give it more depth. The little tribal men are also a serious inconvenience without really benefitting the game. Still, as is often the case with iPhone app games, Tiki Totems 2 is only .99 in the app store. When prices are that low, even with all of these flaws, it may still be worth buying the game.